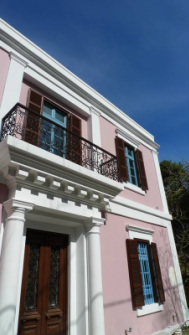 Προ³ stands for 'Proin Proxeneio Project'. The number three refers to the three pro's in the title and to the three partners in this project: RICHeS, the General State Archives, department of the Dodecanese - Genika Archeia tou Kratous (GAK), and the Region (Periferia) of the South Aegean.

One building, two exhibitions
The project is named 'Proin Proxenio': 'former consulate', meaning the former consulate of Greece in the Dodecanese, on I. Kazouli street in Rhodes. This beautiful neoclassical building is of great historical importance for Rhodes. Recently it has been restored to its former glory and at present the last finishing touch is made. The building, owned by the Periferia, will in due time house the planned Museum for Modern History. As a prelude to that, RICHeS and GAK have joined forces and initiated the Pro3 project which will consist of two simultaneous exhibitions, in accordance with the future destination of the building. The first exhibition will show the modern history of Rhodes through documents and objects from the General State Archives of the Dodecanese. The second exhibition will be about the 19th century Dutch/Belgian traveller Bernard Rottiers and his book 'Description des Monumens de Rhodes' (1829). For these exhibitions and to serve as venue for the project events, the Region of the South Aegean has put the building at the disposal of the organisation for the duration of one year, with a possibility of extension.

Groundbreaking
The project is unique for Rhodes and groundbreaking in both form and content. The partnership of two governmental institutions and one NGO in realising a multi-year cultural project is a first for Rhodes. Also regarding the content the project is choosing new roads instead of well known paths. It represents a total concept, in which thematical exhibitions, culture, history and education all come together. It will provide Rhodes with a brandnew and inspiring cultural asset, contribute to the cultural climate in the town and give a quality stimulus to Rhodes as a cultural destination. As such it offers unique possibilities for sponsors.

At present the project is still in the stage of preparation. Budget difficulties prove an extra challenge in times of economic crisis. The restoration of the building will soon be completed. We are confident that the museum will open its doors in 2013.