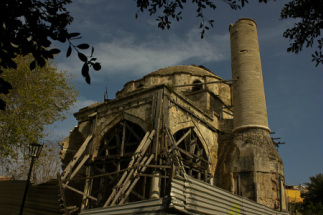 Background
The Ottoman period in Rhodes lasted almost four hundred years; from 1522 to 1912. Directly after establishing Ottoman rule all Christian churches in the town were converted to mosques, simply by adding minarets and mihrabs and by whitewashing the interiors. Nevertheless, in most cases, the basic structure of the buildings was left unaltered. The same happened to many houses and public buildings. Few were demolished, most were just adapted to the needs of the new users.

Situation Reçep Paşa Mosque
However, the Ottomans did change the townscape: by adding a new layer of public buildings such as madrasas, imarets, hamams and mosques, they turned Rhodes into an exemplary provincial Ottoman town. Most striking are the six mosques that were constructed over time within the confinement of the walls. Five of these six mosques are in a good condition, four of them have recently been painstakingly restored. However, the Reçep Paşa mosque, artistically the most important of them, is sadly in an almost ruinous state after decades of neglect. The collapse of a large part of the collonaded portico in december 2011 has prompted a call to action and plans for restoration are being made. A budget of one million euro has been reserved for this cause. This is good news. But it is not enough, not for a full restoration nor otherwise. In our view, it is equally important to find a suitable destination for the building, and to make sure it can contribute to Rhodian society.

A unique monument
The complex of Reçep Paşa – mosque, fountain and mausoleum – was built in 1588 by Reçep Paşa, an influential bey of Rhodes and later vizier under sultan Murat III. In accordance with his wealth and high imperial status, Reçep Paşa spared cost nor effort to embellish his beloved Rhodes with a monumental building that would outshine everything that his predecessors and successors built in Rhodes.

The mosque was built in the imperial style of the Ottoman golden age, by either the Ottoman master architect Mimar Sinan himself, or by an architect from his school. The specifics need to be further researched, but it might very well be that Sinan himself indeed was responsible for at least part of the design. Anyhow, the result was a mosque of great artistic importance, with an interior covered with Iznik tiles, and a harmonious combination of Byzantine-Ottoman and Persian influences. In spite of its bad state, this still makes the Reçep Paşa one of the most important Ottoman monuments in the Aegean islands. A monument that needs to be saved and restored.

A fitting new destination
However, as stated above; restoration alone does not suffice. The challenge is to find a fitting destination for the building, one that respects its integrity and original function. Re-use as a place of worship is not realistic for several reasons, the main one being the fact that the muslim community in Rhodes' old town is small. Furthermore, we believe that the building should not be seen as an 'ethnic' monument, to be claimed by only one part of the population, in this case the muslim community. Ideally, the building should be viewed and used as an example of a common and shared Rhodian cultural heritage. Any new destination should be in concordance with modern ideas about cultural tourism, education, museology and multiculturalism.

Return on investment
Once the building is ready; it must be 'put to work'. In order for buildings like this to survive and to be enjoyed by us and future generations, it needs to find a place within our society and actively contribute to that society, culture and economy. There is no need for yet another restored, but closed, mosque in Rhodes. These days especially, with money being scarce, we should expect at least some return on investment, also from investments in culture and heritage. The one does not exclude the other.

Reallocation towards culture
The most logic and sensible thing to do, as has happened with other former mosques, is to give the building a cultural destination. The building should house a cultural institution that is open for the public and one that is of a very high standard of quality, in accordance with the artistic status of the building and the status of Rhodes as Unesco World Heritage City.

A Museum of Islamic Art in Rhodes
Considering all the above, we believe that it would be best to establish a museum in the mosque that honours aspects of the culture that produced it. We therefore propose to establish a museum for Islamic art, in particular for Islamic ceramics and pottery. Not only because the mosque itself, with its Iznik interior is a monument of Islamic ceramic art, but also because this would enable to make a link with the local historic production of so-called 'Lindos' ceramics, which is closely related to the Iznik tradition. This combination would set the mosque and the collection on display in a certain context, and shows ties between cultures, therefore contributing to strengthening mutual cultural understanding between christians and muslims.

Besides, a museum of Islamic Art would fill the present gap in the cultural offer of Rhodes. After all, all historic periods and cultures of Rhodes, including the Jewish, are represented in the various museums. Not so however, the Ottoman culture. That way the museum would bridge a gap between two cultural traditions by showing their common origin and characteristics.

To establish a museum out of nothing, to accquire a collection and organize the whole project is however very costly and time consuming. We propose therefore to outsource the entire project to an established organisation with the neccessary know-how and an existing collection. The small size of the building and the collection on display would mean a relative low cost of maintenance and exploitation, with an expected high turnover, considering the fact that Rhodes is a number one tourist destination. An adjacent museum shop, with no competition in Rhodes or the wider region, can contribute to making the project profitable.

By establishing this annex 'Museum for Islamic Art in Rhodes', both the museum and the town of Rhodes would follow a recent and very popular trend in the museum world; the establishment of annexes of renowned museums in other towns and countries. Think, for instance, of the Hermitage Museum in Amsterdam, the Guggenheim in Bilbao, the future Louvre in Abu Dhabi. This formula has proved very beneficial for all parties concerned. The original museum increases its fame and finds new ways of attracting new audiences and opportunities. The host town or country benefits from having a world renowned top museum within its borders, without having to start everything from scratch. It puts the host town immediately and firmly on the cultural map, ensuring new streams of publicity, tourism and income. The establishment of a museum for Islamic Art in the Reçep Paşa mosque would at once show that Rhodes is a serious cultural destination, and one that respects and honours its heritage. Just as cities like Toledo and Cordoba with their policy of 'Tres Culturas' do, much to their benefit.

We are happy to let you know that we already contacted one of the leading cultural institutions in Greece and have received a positive reply to our proposal.

Summarizing, we discern the following advantages: